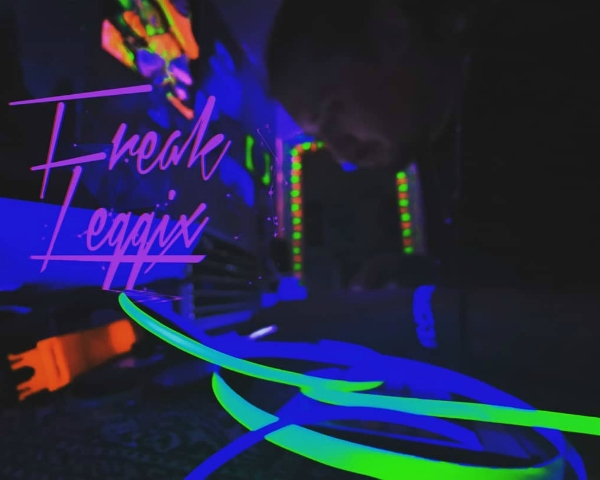 At the age of 14, Freek Seisveld, also known as Freak Leggix, started to delve into Music Production. After years of playing guitar he got familiar with production software and a new world opened up for him full of new possibilities and experiments. From the age of 16 he started playing in different bands, each time developing a little more. In 2009 he started a new band called Ivaras with his best friend. Which evolved itself into a Live act, filled with black-light art and Psychedelic Electronic music they lit up the stage together.  At the same time he was in school to become a Music Technician/Producer. After graduation and a lot of live performances, it was time for something new. Many projects followed where his music combined with dance, art or poetry came to a stunning result. In 2012 he started an education in Sound Design at the Dutch Pop Academy. It was around this time that his interest in crossover music started to grow, so De Producent was born. A raw mix of Electropunk, Breakbeat and Industrial Rave combined with Rap vocals and Guitar.  A successful collaboration between multiple talented artists resulted in a Dutch club tour.  After his graduation, life got in the way and forced him to move across the country for a job. Days passed by behind an office desk but music always stayed an interest of his.  Together with a colleague he started a DJ duo Frequent Guest. Festival music with influences from the world of Progressive Techno and Minimal. Begin 2018 this came to an end and a new era was born, one in which Freak Leggix started working on his own. Neon Dreams will be his first solo album, coming in the beginning of 2019. He finally had a chance to develop his own style which could be filed under Progressive Pop with a slight touch of 80’s Dance music.  Beside working on his album he is still busy with multiple types of electronic music, like his newest release “Think”. Now he signed his first contract at Right Music Records. Good things are coming!   “I’m delighted to be a part of Right Music Records, there are a lot more tracks waiting to be released, so expect to hear more from me!”