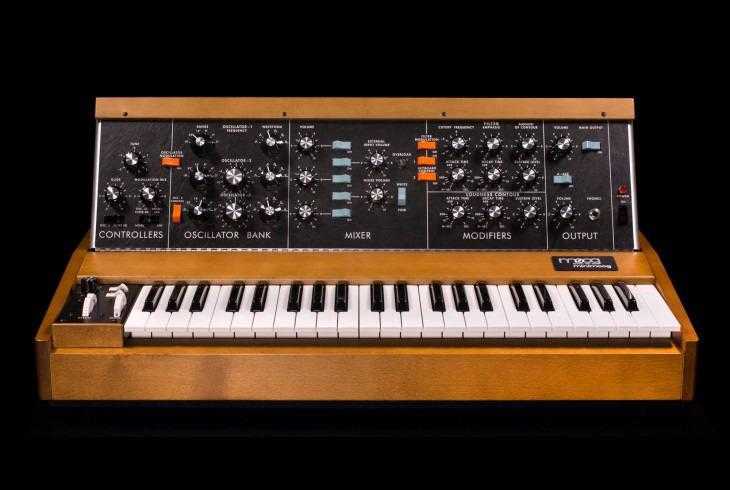 In the 1960s, RA Moog Co manufactured Moog modular synthesizers, which helped bring electronic sounds to music but remained inaccessible to ordinary people. The modular synthesizers were difficult to use, requiring users to connect components manually with patch cables to create sounds, were sensitive to temperature and humidity, and cost tens of thousands of dollars. Most of these synthesizers were owned by universities or record labels, and used to create soundtracks or jingles; by 1970, only 28 were owned by musicians.

Moog engineer Bill Hemsath wondered if the company could create a smaller, more reliable synthesizer. He created a prototype, the Min A, by sawing a keyboard in half and wiring several modules into a small cabinet. Moog president Robert Moog felt the prototype was fun, but did not initially see a market for it. Hemsath and other engineers, and later Moog, created several more prototypes, adding features such as the suitcase design to aid portability.

In early 1970, Moog Co began losing money as interest in its modular synthesizers fell. While Moog was away, the engineers, fearing they would lose their jobs when the company closed, developed a version of Hemsath’s miniature synthesizer, the Minimoog Model D. Moog chastised them, but came to see the potential in the Model D and authorized its production.

The engineers could not get the power supply to stabilise properly, which meant that the Minimoog’s three oscillators were never completely synchronized. Although unintentional, this created the synthesizer’s “warm, rich” sound. Its voltage-controlled filter was unique, allowing users to shape sounds to create “everything from blistering, funky bass blurps … to spacey whistle lead tones”.The Minimoog also was the first synthesizer to feature a pitch wheel, which allows players to bend the note of the synthesizer as a guitarist or saxophonist does, allowing for more expressive playing. Future synthesizers incorporated their own pitch wheels. According to David Borden, one of the first users of the Minimoog, “If [Robert Moog] had patented [the pitch wheel], he would have been an extremely wealthy man.”

Moog Co released the first Minimoog in 1971. Moog said the Minimoog was “conceived originally as a session musician’s axe, something a guy could carry to the studio, do a gig and walk out. We thought we’d sell maybe 100 of them.” Moog hired engineer and musicologist David Van Koevering to travel demonstrating Minimoogs to musicians and music stores. Van Koevering’s friend Glen Bell, founder of Taco Bell, allowed him to use a building on a private island Bell owned in Florida. Van Koevering used the building to host an event he billed as “Island of Electronicus”, a “psuedo-psychedelic experience that brought counterculture (minus the drugs) to straight families and connected it with the sound of the Minimoog”.

The Minimoog was in continuous production for thirteen years and over 12,000 were made.[4] It was the first synthesiser sold in retail stores. Despite the success of the Minimoog, Moog Co could not afford to meet demand, nor had credit for a loan, and Moog sold the company. Production of the Minimoog stopped in the early 1980s and the company ceased all production in 1993. In 2002, Robert Moog reacquired the rights to the Moog name and bought the company. In 2002, Moog Co released the Moog Voyager, an updated version of the Minimoog that sold more than 14,000 units, more than the original Minimoog. In 2016, Moog Music began manufacturing an updated version of the Model D. Moog announced the end of Model D production in June 2017. Numerous companies, including Arturia and Behringer, have developed clones and software emulations of the Minimoog. In 2018, Moog Music released a Minimoog app for iOS.